When you see the likes of Rafael Nadal battering the ball around a tennis court, it might not be immediately clear how yoga and tennis fit together. However, yoga has been a key ingredient in improved tennis fitness, and it’s changed the way the game is played.

Over the last 15 years, professional tennis has become a much more physical sport. Gone are the days of serve and volley and part time professionals; tennis is now a very demanding full-time job.

Where a normal person will have the weekend to recover from a long week at work, a professional tennis player must recover from gruelling long matches while travelling and keeping up intense hours of practice.

This means pros need to find a way to effectively and efficiently look after their bodies, engage in active recovery and improve their on-court performance in a time effective manner. If only such a thing existed…

Here’s where yoga has shown to be a vital tool!

The Pros Turning to Yoga

Many professional tennis players have turned to yoga over the past two decades to provide this source of recovery and flexibility that they so desperately need whilst grinding it out on the professional circuit. Although many of the highest paid and top ranked players will travel with physios and physical trainers to help with their recovery, yoga has become an integral part of many players’ routines.

Even on the shots we take for granted such as the serve, the body is under enormous pressure, and tennis player’s bodies need to be extremely flexible to deal with this. This takes a huge amount of physical training, and yoga is now a fundamental part of this.

We have seen many players partake in yoga on social media, such as Grigor Dimitrov, Sam Querrey, Kei Nishikori, Andy Murray, Roger Federer and Kevin Anderson. There is no doubt that the vast majority will now use yoga, Pilates and dynamic stretching to aid in their recovery and advance their flexibility on court.

No player has embraced and embodied the full yoga experience more than Novak Djokovic. One of the main traits that has set Djokovic apart from the rest of the field over the past 15 years has been his physicality.

Modern day tennis requires a unique combination of strength, rotational power, speed and flexibility, especially in the modern game. Novak has excelled in this area with his exceptional flexibility and strength from fully outstretched positions.

In many ways, Djokovic has pushed the game on to new physical levels, through his flexibility, agility, and power, and yoga has been a key part of this. His incredible physicality makes the court feel small for an opponent and overwhelms them, forcing them into errors that they would not usually commit.

Since bursting on the scene in 2008 and winning his first Grand Slam at the Australian open, Djokovic has been heralded as one of the most flexible players on tour. This is fundamentally down to his dedication to yoga which has helped him with breathing difficulties, lower back pain, on court performance and mental clarity.

Coincidentally (or not,) Djokovic has racked up 17 grand slam titles in that time and has spent an endless number of weeks ranked the number one player in the world.

The video below is an early example of Djokovic explaining just how beneficial embracing yoga has been for his tennis career:

A Key Element of Tennis

Following Djokovic’s success in dominating men’s tennis for the best part of 10 years, many other professional and mature players have taken to yoga as a way to improve their tennis.

It’s now clear to see how yoga has reshaped the game of tennis, bringing extra athleticism, and importantly, allowing players to play at the top level for longer. Yoga has certainly been an instrumental part of making the physicality of the modern game more sustainable, along with shaping new footwork techniques and playing styles that push the game on to new levels.

How Yoga Improves Your Tennis

Yoga has reshaped how tennis players move on the court and recover and strengthen their bodies off the court. More specifically, it is great at improving a few specific areas related to tennis.

Yoga stretches out your muscles and tendons over an extended period of time, allowing them to relax and become more flexible. This is great for tennis since improved flexibility increases your range of motion.

This image might be common place in Yoga, but it’s also creating flexibility that’s essential on the tennis court.

Being able to move through a full range of motion allows you to reach balls you otherwise would not be able to, while improving your power generation. With a full range of motion, you can twist fully in your serves, extend through your forehands and backhands, reach down low to volleys and turn defence into attack on a stretching passing shot.

Yoga helps with joint decompression which is a key benefit in tennis. Your back, hips, knees, and shoulders are often overused and muscle imbalances are commonplace in tennis players. These occur when the body is asymmetrical and you use one side a lot more vigorously, which of course happens a lot in tennis.

Holding yoga poses also helps with blood circulation and helps prevent muscle soreness and stiffness. These factors aid in muscle repair and recovery, along with strengthening the associated tendons.

Performing yoga properly requires sound posture and body structure. Therefore, doing yoga regularly helps by realigning your body to its natural and healthy form. This is also great for injury prevention and improving your range of motion.

Many yoga poses also require a great deal of balance to hold for any length of time, so of course this will also be improved in the process! Balance is a key element to playing better tennis, as it allows you to be nimble and change direction more efficiently.

One of the often-overlooked aspects of yoga is the mental calmness it provides. During a yoga session, you will be concentrating solely on the task in hand. Most yoga positions engage almost all muscle groups and different areas of your body, so whilst improving your hand-eye coordination, you’ll also be pretty preoccupied.

This, along with the endorphins released from the exertion, give a great sense of calmness and mental clarity after a yoga session. This can then be transferred into other areas of life, including onto the tennis court.

Below are a few of the most beneficial yoga positions for tennis players. These poses will stretch and strengthen the most used muscles in tennis and help you to improve your game.

This position is fantastic for releasing tension in the spine and back muscles, along with improving breath control.

The pigeon pose is essential for stretching out hip flexors and glutes, two fundamental body parts used for tennis.

This pose is great for stretching the upper body. You will relieve tension from your chest, spine and shoulders by rotating through the pose, along with improving balance.

The tree pose helps to stretch and strengthen the hips, whilst predominantly focussing on balance. This is a challenging pose for tennis players.

Yoga has undoubtedly had a role in shaping professional tennis, but it’s not just in the pro game that it can make a difference.

Every tennis player wants to continue to enjoy the game well into old age without suffering from the niggling injuries that tennis often involves. Yoga is an amazing way to protect yourself from some of the most common tennis injuries, and there are so many benefits besides this.

Yoga has changed the game of tennis at the very top, and it can also have a positive impact for you.

Editor’s note: This is a guest post by William Palmer, a former college tennis player and founder of www.thetennisbros.com. Having suffered from chronic injuries, he has embraced yoga as a way to keep him playing the game he loves. 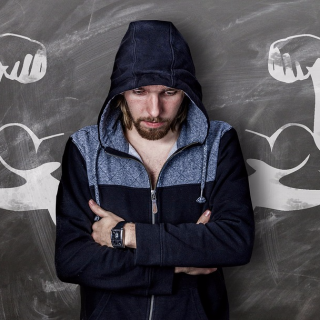 Will Perrie is fitness enthusiast and a lover of life. He believes that life is wonderful and should be enjoyed.